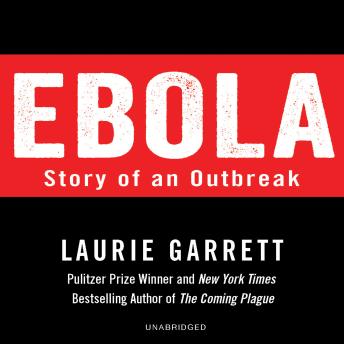 Ebola: Story of an Outbreak

Download or Stream instantly more than 55,000 audiobooks.
Listen to "Ebola: Story of an Outbreak" on your iOS and Android device.

Where does Ebola originate? How does it spread? And what should governments do to stop it? Few people understand the answers to these questions better than Pulitzer Prize-winning journalist Laurie Garrett.

In this masterful account of the 1995 Ebola outbreak in Zaire, Garrett, now the Senior Fellow for Global Health at the Council on Foreign Relations, shows how superstition and fear, compounded by a lack of resources, education, and clearheaded government planning have plagued our response to Ebola. In an extensive new introduction, Garrett forcefully argues that learning from past outbreaks is the key to solving the Ebola crisis of 2014.

In her account of the 1995 Zaire outbreak, first published in her bestselling book Betrayal of Trust, Garrett takes readers through the epidemic's course-beginning with the Kikwit villager who first contracted it from an animal encounter while chopping wood for charcoal deep in the forest. As she documents the outbreak in riveting detail, Garrett shows why our trust in world governments to protect people's health has been irrevocably broken. She details the international community's engagement in the epidemic's aftermath: a pattern of response and abandonment, urgency that devolves into amnesia.

EBOLA: STORY OF AN OUTBREAK is essential reading for anyone who wants to comprehend Ebola, one of mankind's most mysterious, malicious scourges. Garrett has issued a powerful call for governments, citizens, and the disease-fighting agencies of the wealthy world to take action.