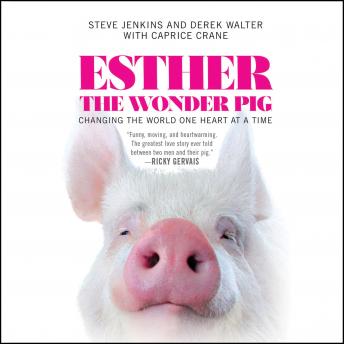 Esther the Wonder Pig: Changing the World One Heart at a Time

Download or Stream instantly more than 55,000 audiobooks.
Listen to "Esther the Wonder Pig: Changing the World One Heart at a Time" on your iOS and Android device.

Unlikely pig owners Steve and Derek got a whole lot more than they bargained for when the designer micro piglet they adopted turned out to be a full-sized 600-pound sow! This funny, inspirational story shows how families really do come in all shapes and sizes.

In the summer of 2012, Steve Jenkins was contacted by an old friend about adopting a micro piglet. Though he knew his partner Derek wouldn't be enthusiastic, he agreed to take the adorable little pig anyway, thinking he could care for her himself. Little did he know, that decision would change his and Derek's lives forever.

It turned out there was nothing 'micro' about Esther, and Steve and Derek had actually signed on to raise a full-sized commercial pig. Within three years, Tiny Esther grew to a whopping 600 pounds. After some real growing pains and a lot of pig-sized messes, it became clear that Esther needed much more space, so Steve and Derek made another life-changing decision: they bought a farm and opened the Happily Ever Esther Farm Sanctuary, where they could care for Esther and other animals in need.