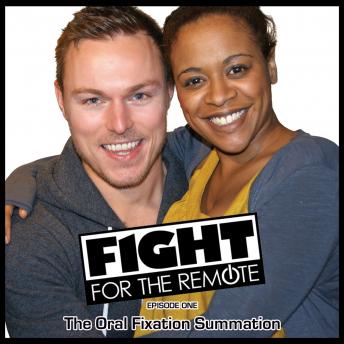 Fight for the Remote - Episode 1

Download or Stream instantly more than 55,000 audiobooks.
Listen to "Fight for the Remote - Episode 1" on your iOS and Android device.

Episode One: The Oral Fixation Summation "You're so working class I can't believe I've ever let you inside of me" Neither Jon nor Alice feels like they are getting enough and the frustration is tangible. If the other can't help then who can? Best friends? Colleagues? The corner shop/kebab house owner? Fighting for the remote are Jon and Alice, a twenty-something couple living together in London. Alice enjoys socialising; Jon hates meeting people. While Alice is climbing her career ladder, Jon is quite content on the bottom rung of his. They are constantly caught in the middle ground between settling for what they have and wanting more, and wondering whether what they have together is worth fighting for... Written by Mark Adams and Julia Dawn. Directed by Dexter O'Neill and Helen Oakleigh. Fight for the Remote stars Andrew Hayden-Smith as Jon and Ayesha Antoina as Alice with Ellen Thomas as Mrs. Hamilton. THE CAST; ALICE - Ayesha Antoine; JON - Andrew Hayden-Smith; KEREN - Helen Oakleigh; GRUB - Daniel King; MARRIED DAVE - Nathiel King; CAMP RAYMOND - Keith Flood; HAPPY AZIZ - Neil D'Souza with Ellen Thomas as MRS. HAMILTON. Recorded at Orpheus Studios. Theme Tune by Manike Music. Post Production by Robbie Dunlop. Fantom Films Production 2011. www.fantomfilms.co.uk www.fightfortheremote.co.uk.