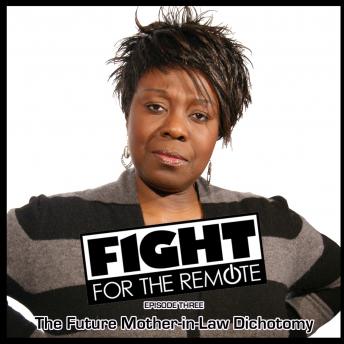 Fight for the Remote - Episode 3

Download or Stream instantly more than 55,000 audiobooks.
Listen to "Fight for the Remote - Episode 3" on your iOS and Android device.

Episode Three: The Future Mother-in-Law Predicament "Why did we have to let her in? Could we not have just posted her a duvet through the letter-box?" Alice's Mum comes to stay and Jon is not happy. A house-proud woman with a bosom as pronounced as her carefully annunciated consonants, she cleans, criticises, pokes and potters until not even Alice can take it anymore, forcing her to call on reinforcements with equally masterful diction. Written by Mark Adams and Julia Dawn. Directed by Dexter O'Neill and Helen Oakleigh. Fight for the Remote stars Andrew Hayden-Smith as Jon and Ayesha Antoina as Alice with Ellen Thomas as Mrs. Hamilton. THE CAST; ALICE - Ayesha Antoine; JON - Andrew Hayden-Smith; KEREN - Helen Oakleigh; GRUB - Daniel King; MARRIED DAVE - Nathiel King; CAMP RAYMOND - Keith Flood; HAPPY AZIZ - Neil D'Souza. Recorded at Orpheus Studios. Theme Tune by Manike Music. Post Production by Robbie Dunlop. Fantom Films Production 2011. www.fantomfilms.co.uk www.fightfortheremote.co.uk.