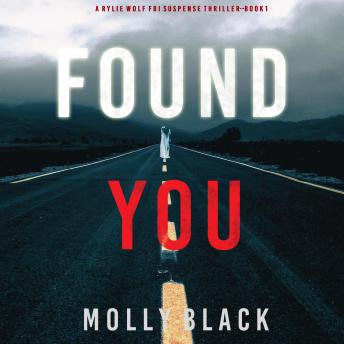 Found You (A Rylie Wolf FBI Suspense Thriller—Book One)

Download or Stream instantly more than 55,000 audiobooks.
Listen to "Found You (A Rylie Wolf FBI Suspense Thriller—Book One)" on your iOS and Android device.

A notorious stretch of highway is rife with serial killers, unsolved murders and missing-persons cases. The FBI, knowing it must crack this Bermuda Triangle of death, assigns its most brilliant mind—and flawed agent—Rylie Wolf, to dive headfirst into this road of danger. Rylie must tap her brilliant instincts to decode these cases and enter the twisted mind of killers—while battling demons from her own dark past.

In FOUND YOU (A Rylie Wolf FBI Suspense Thriller—Book One), FBI Agent Rylie Wolf isn’t afraid to speak her mind. But when her headstrong tendencies land her in hot water, she finds herself assigned to a new location: a dangerous stretch of highway, spanning several states, known for unsolved murders and missing-persons cases. Rylie, still haunted by a near miss with a murderer during her childhood, knows this area all too well. It was one she hoped never to return to.

Victims are found strung to mile markers along the highway, an eerie trademark of a serial killer.

Rylie and her new partner must track down the killer, but the pattern of murders is baffling. With the FBI breathing down her neck, time is running out, and as the pressure ramps up, Rylie finds herself in the middle of a cat-and-mouse game with a killer more deranged than she could have ever imagined.

Can Rylie stop the murderer before he kills again?

Or will she herself be the next victim?

A complex psychological crime thriller full of twists and turns and packed with heart-pounding suspense, the RYLIE WOLF mystery series will make you fall in love with a brilliant new female protagonist and keep you turning pages late into the night. It is a perfect addition for fans of Robert Dugoni, Rachel Caine, Melinda Leigh or Mary Burton.

Books #2 and #3 in the series—CAUGHT YOU and SEE YOU—are now also available.