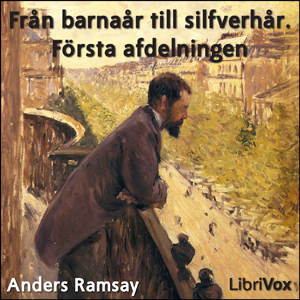 Download or Stream instantly more than 55,000 audiobooks.
Listen to "Från barnaår till silfverhår. Första afdelningen" on your iOS and Android device.

Anders Ramsay's eight volumes offer a great wealth of information about aristocratic life in 19th century Finland, as well as of life in Paris, on the grand tour in Italy and so on.

Ramsay's style of writing is free and full of delightful humour -- often at the author's own expense. His life is also a good illustration of the process of industrialisation in Finland, as well as of the triumph of the capitalist spirit over older, aristocratic values. Born a nobleman and landowner, Ramsay felt forced to become an industrialist, but failed miserably. He then went into business, where he failed as completely. However, his autobiography, written at the very end of his life, became a huge critical and popular success, to his immense joy and pride. (Summary by Måns Broo)