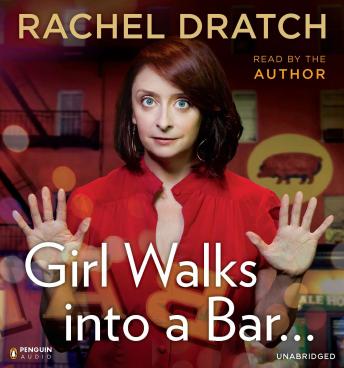 Girl Walks into a Bar . . .: Comedy Calamities, Dating Disasters, and a Midlife Miracle

Download or Stream instantly more than 55,000 audiobooks.
Listen to "Girl Walks into a Bar . . .: Comedy Calamities, Dating Disasters, and a Midlife Miracle" on your iOS and Android device.

In this side-splitting memoir, the former Saturday Night Live star recounts the hilarious adventures and unexpected joy of dating and becoming a mother when she least expected it-at the age of forty-four. Anyone who saw an episode of Saturday Night Live between 1999 and 2006 knows Rachel Dratch. She was hilarious! So what happened to her? After a misbegotten part as Jenna on the pilot of 30 Rock, Dratch was only getting offered roles as "Lesbians. Secretaries. Sometimes secretaries who are lesbians."

Her career at a low point, Dratch suddenly had time for yoga, dog- sitting, learning Spanish-and dating. After all, what did a forty- something single woman living in New York have to lose? Resigned to childlessness but still hoping for romance, Dratch was out for drinks with a friend when she met John.

Handsome and funny, after only six months of dating long-distance, he became the inadvertent father of her wholly unplanned, undreamed-of child, and moved to New York to be a dad. With riotous humor, Dratch recounts breaking the news to her bewildered parents, the awe of her single friends, and the awkwardness of a baby-care class where the instructor kept tossing out the f-word.

Filled with great behind-the-scenes anecdotes from Dratch's time on SNL, Girl Walks into a Bar... is a refreshing version of the "happily ever after" story that proves female comics-like bestsellers Tina Fey and Chelsea Handler-are truly having their moment.