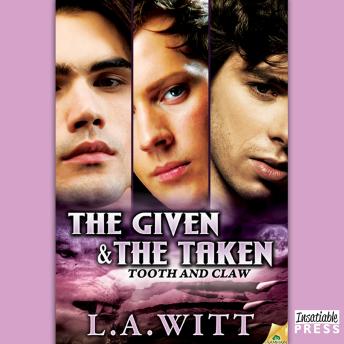 Download or Stream instantly more than 55,000 audiobooks.
Listen to "The Given & The Taken: Tooth & Claw 1" on your iOS and Android device.

Love's compass is never wrong-even when it points in two different directions. After pleading his case to his wolf clan's Elders, Levi is granted the right to bond with Ian, his male human lover, on one condition: they must spend one year apart. Then Levi must use only their spiritual connection to find Ian, or the deal is off. Tracking down his lover is easy, but Levi isn't prepared for the changed man he finds. The agony of separation was too much for Ian. In a moment of weakness, he reached out-to a vampire. Now he's a vampire himself, and Levi's devastation-and rejection-is like a stake to his heart. But it's nothing compared to the fury of the clan that wants Ian brought to justice for desecrating their most sacred ritual. Afraid for Ian's safety, Levi puts the pain aside and races to get to Ian first, but he faces unexpected competition: Darius, Ian's maker. When they come together, all hell breaks loose, Ian is on the run...and the only way Levi and Darius can save the man they love is work together. If they don't kill each other first. Warning: Contains two vampires and a werewolf who really, really, really want to hate each other. Except when they want each other. And have violent, sweaty, angry sex with each other. But they still hate each other. Mostly.