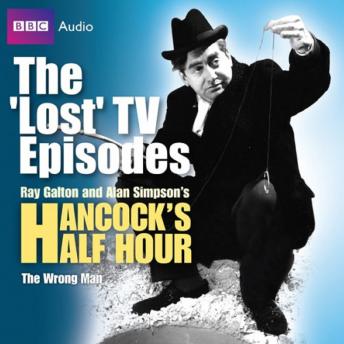 Hancock's Half Hour: The Wrong Man (The 'Lost' TV Episodes)

Download or Stream instantly more than 55,000 audiobooks.
Listen to "Hancock's Half Hour: The Wrong Man (The 'Lost' TV Episodes)" on your iOS and Android device.

First broadcast live in 1959 as part of Tony Hancock's 4th BBC TV Series, these rare recordings are made available for the first time in over fifty years. The Wrong Man sees Hancock and Sid called in to take part in a police identity parade. However, when a witness picks Hancock out for the burglary of a high street tobacconist, he has only days to clear his name. One of the long 'lost' Hancock TV Episodes recently discovered by the Hancock Appreciation Society. 2009 is the 60th Anniversary of the Galton and Simpson writing partnership. Some of the lost episodes feature Ray and Alan in walk on parts as well as stars like John Le Mesurier, Arthur Mullard, Rolf Harris, and of course the inimitable Sid James and Anthony Aloysius St John Hancock!!