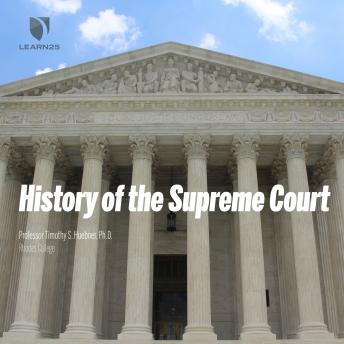 History of the Supreme Court

Download or Stream instantly more than 55,000 audiobooks.
Listen to "History of the Supreme Court" on your iOS and Android device.

What would you like to know about the Supreme Court's evolution, its immense impact, and its crucial role in democracy?

Now is your chance to explore the law of the land with an acclaimed expert on the United States Constitution and the Supreme Court. In 24 stimulating lectures, you will survey the history of the Supreme Court from its inception through the present day.

Your discussion stays rooted in the historical-not the legal or political. In other words, you do not need a law or political science degree to understand how the nomination and confirmation process has changed, or how the justices have differed in their approaches to the Constitution, or why the Court's decisions matter now more than ever. Likewise, you do not need to put your guard up when discussing controversial decisions. Instead, you will study the evolution of the Court with an eye towards understanding how it has come to play such an important role in American life.

As you know, much of American ideology and history appears mired in contradiction. The Supreme Court is no exception. Throughout the course, you will gain an appreciation for the American public's paradoxical attitudes toward the judiciary over the centuries.

After examining landmark decisions and key players in the history of the Supreme Court, you will arrive at a fuller understanding of its role in both shaping and responding to larger developments across American society.