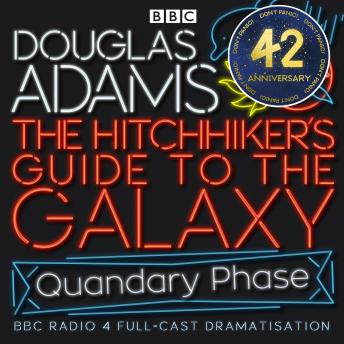 Hitchhiker's Guide To The Galaxy, The Quandary Phase

Download or Stream instantly more than 55,000 audiobooks.
Listen to "Hitchhiker's Guide To The Galaxy, The Quandary Phase" on your iOS and Android device.

Don’t panic! The Hitchhiker’s saga returns once again with a full-cast dramatisation of So Long and Thanks For All the Fish, the fourth book in Douglas Adams’s famous ‘trilogy in five parts’.

‘At the risk of being controversial, it’s better than the book... Hitchhiking is back – long may it continue.’ Guy Clapperton, Radio Times

The Earth has miraculously reappeared and, even more miraculously, Arthur Dent has found it. Returning to his cottage after... well... ages, he falls in love with the girl of his dreams.

But Ford Prefect is on to something which might well burst Arthur’s bubble. There is, after all, something very fishy about his girlfriend’s feet, and what has happened to all the dolphins? Perhaps, at last, all will be revealed in God’s Last Message to His Creation…

This extended edition features 30 minutes of material not heard on BBC Radio 4.