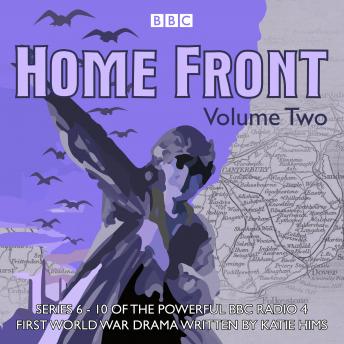 Download or Stream instantly more than 55,000 audiobooks.
Listen to "Home Front: The Complete BBC Radio Collection Volume 2" on your iOS and Android device.

Series 6-10 of the epic BBC Radio 4 drama charting life on the home front during the First World War - plus special episode Home Front: A Lightening
First heard on radio between 4 August 2014 and 9 November 2018, each episode of Home Front is set exactly one hundred years before the broadcast date, and each follows one character's day. Together they create a mosaic of experience from a wide cross-section of society, mixing historical fact with enthralling fiction to explore how ordinary people coped with daily life in wartime Britain.
We resume the story in Folkestone, where hospital staff face pressure to return wounded men to duty as conscription is introduced. Zeppelin bombs leave residents jumpy, and 'spy fever' is at a pitch as the Secret Service comes to town. Food shortages begin to bite - and the town is rocked by Britain's first ever air raid, causing the greatest number of civilian casualties of the war to date.
We also meet the residents of Ashburton, Devon, where the future of Isaac Cox's family hangs in the balance as old feuds are reignited at Halecot Farm.
In Tynemouth, paranoia is rife and emotions run high for those at Marshall's factory. The repercussions of a devastating explosion ripple through people's lives, but they face the future with fortitude, taking small but courageous steps forward.
Tackling themes including nursing and casualties, conscription and objection, espionage and propaganda, xenophobia and suspicion and the church and class are some of radio's foremost dramatists including Richard Monks, Mike Walker and Sarah Daniels. Among the extensive cast are Martine McCutcheon, Anton Lesser, Maggie Steed and Gunnar Cauthery. Also included is Home Front: A Lightening, a special 45-minute episode marking the centenary of Britain's first Gotha Air Raid, which devastated Folkestone on 25 May 1917.