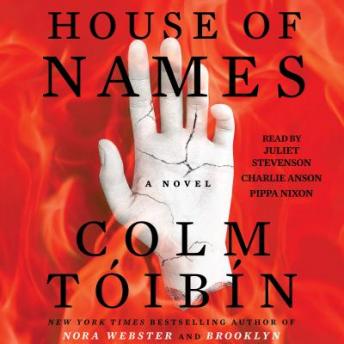 Download or Stream instantly more than 55,000 audiobooks.
Listen to "House of Names" on your iOS and Android device.

From the thrilling imagination of bestselling, award-winning Colm Tóibín comes a retelling of the story of Clytemnestra and her children—“brilliant…gripping…high drama…made tangible and graphic in Tóibín’s lush prose” (Booklist, starred review).

“I have been acquainted with the smell of death.” So begins Clytemnestra’s tale of her own life in ancient Mycenae, the legendary Greek city from which her husband King Agamemnon left when he set sail with his army for Troy. Clytemnestra rules Mycenae now, along with her new lover Aegisthus, and together they plot the bloody murder of Agamemnon on the day of his return after nine years at war.

Judged, despised, cursed by gods, Clytemnestra reveals the tragic saga that led to these bloody actions: how her husband deceived her eldest daughter Iphigeneia with a promise of marriage to Achilles, only to sacrifice her; how she seduced and collaborated with the prisoner Aegisthus; how Agamemnon came back with a lover himself; and how Clytemnestra finally achieved her vengeance for his stunning betrayal—his quest for victory, greater than his love for his child.

House of Names “is a disturbingly contemporary story of a powerful woman caught between the demands of her ambition and the constraints on her gender…Never before has Tóibín demonstrated such range,” (The Washington Post). He brings a modern sensibility and language to an ancient classic, and gives this extraordinary character new life, so that we not only believe Clytemnestra’s thirst for revenge, but applaud it. Told in four parts, this is a fiercely dramatic portrait of a murderess, who will herself be murdered by her own son, Orestes. It is Orestes’s story, too: his capture by the forces of his mother’s lover Aegisthus, his escape and his exile. And it is the story of the vengeful Electra, who watches over her mother and Aegisthus with cold anger and slow calculation, until, on the return of her brother, she has the fates of both of them in her hands.