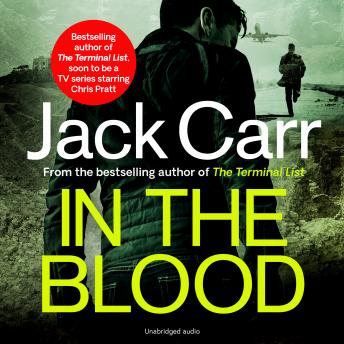 In the Blood: James Reece 5

Download or Stream instantly more than 55,000 audiobooks.
Listen to "In the Blood: James Reece 5" on your iOS and Android device.

**SOON TO BE A TV SERIES STARRING CHRIS PRATT**

'Take my word for it, James Reece is one rowdy motherf***er. Get ready!' Chris Pratt

A woman boards a plan in Burkina Faso having just completed a targeted assassination for the state of Israel. Two minutes after takeoff her plane is blown out of the sky.

6000 miles to the east, James Reece watches the names and pictures of the victims cross cable news. One face triggers a distant memory of a Mossad operative attached to the CIA years earlier in Iraq, a woman with ties to the intelligence services of two nations, a woman Reece thought he would never see again…

In a global pursuit spanning four continents, James Reece will enlist the help of friends new and old to track down her killer and walk right into a trap set by a master sniper, a sniper who has enlisted help of his own…

‘A propulsive and compulsive series. Jack Carr’s James Reece is the kind of guy you’d want to have in your corner. A suspenseful and exhilarating thrill-ride. Jack Carr is the real deal’ Andy McNab

'This is seriously good . . . the suspense is unrelenting, and the tradecraft is so authentic the government will probably ban it – so read it while you can!' Lee Child

'With a particular line in authentic tradecraft, this fabulously unrelenting thrill-ride was a struggle to put down' Mark Dawson

‘So powerful, so pulse-pounding, so well-written – rarely do you read a debut novel this damn good’ Brad Thor

'Carr writes both from the gut and a seemingly infinite reservoir of knowledge in the methods of human combat. Loved it!' Chris Hauty

'A powerful, thoughtful, realistic, at times terrifying thriller that I could not put down. A terrific addition to the genre, Jack Carr and his alter-ego protagonist, James Reece, continue to blow me away' Mark Greaney