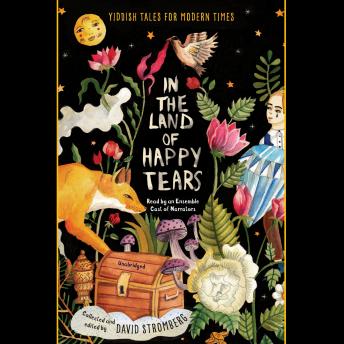 In the Land of Happy Tears: Yiddish Tales for Modern Times: collected and edited by David Stromberg

Download or Stream instantly more than 55,000 audiobooks.
Listen to "In the Land of Happy Tears: Yiddish Tales for Modern Times: collected and edited by David Stromberg" on your iOS and Android device.

You don't need to be Jewish to love Levy's rye bread, nor do you need to read Yiddish to appreciate these wise tales. This engaging audio collection offers access to modern works--translated for the first time into English--for anyone who appreciates a well-told story rich with timeless wisdom. A year-round audiobook for families. Includes a comprehensive introduction on Yiddish culture.

These eighteen stories for a changing world, never before translated into English, by writers from Eastern European countries including Russia and Poland, focus on excellent storytelling, strong characters, and creative ideas. The stories express solid principles and open-minded attitudes, and a sense of both familiarity and adventure in the face of difficult times.

As the old Eastern European Yiddish-speaking world began to clash with modernity, Yiddish authors created new stories to capture the imaginations of children growing up in times of social and historical upheaval. These stories have largely been overlooked or forgotten, until now. These hidden treasures from the early- and mid-20th-century rich Yiddish literary tradition each provide a satisfying read, while the entire collection runs the gamut of storytelling modes used to bridge new and old worlds. Authors include some of the most respected Yiddish writers of their time, who were known in their homelands and then in America, such as Moyshe Nadir, Jacob Reisfeder, Sonya Kantor, and many others. The ethos binding the stories focuses on messages that continue to ring true today while reinvigorating the idea of values largely usurped from contemporary society.