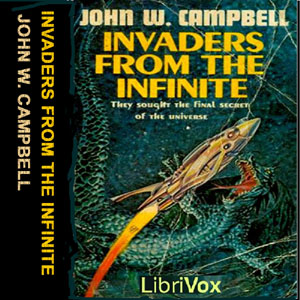 Invaders from the Infinite

Download or Stream instantly more than 55,000 audiobooks.
Listen to "Invaders from the Infinite" on your iOS and Android device.

The famous scientific trio of Arcot, Wade and Morey, challenged by the most ruthless aliens in all the universes, blasted off on an intergalactic search for defenses against the invaders of Earth and all her allies. World after world was visited, secret after secret unleashed, and turned to mighty weapons of intense force--and still the Thessian enemy seemed to grow in power and ferocity. Mighty battles between huge space armadas were but skirmishes in the galactic war, as the invincible aliens savagely advanced and the Earth team hurled bolt after bolt of pure ravening energy--until it appeared that the universe itself might end in one final flare of furious torrential power.... (Summary by From the Gutenberg text)