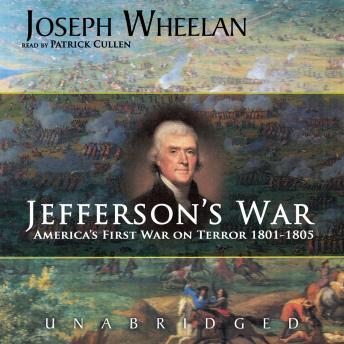 Download or Stream instantly more than 55,000 audiobooks.
Listen to "Jefferson's War: America's Frist War on Terror 1801-1805" on your iOS and Android device.

Two centuries ago, without congressional or public debate, Thomas Jefferson, a president who is thought of today as peaceable, launched America’s first war on foreign soil—a war against terror. The enemy was Muslim; the war was waged unconventionally, with commandos, native troops, and encrypted intelligence, and launched from foreign bases.
For nearly two hundred years, the Barbary pirates had haunted the Mediterranean, enslaving tens of thousands of Europeans and extorting millions of dollars from their countries in a mercenary holy war against Christendom. Sailing in sleek corsairs built for speed and plunder, the Barbary pirates attacked European and American merchant shipping with impunity, triumphing as much by terror as force of arms.
The author traces the events leading to Jefferson’s belief that peace with the Barbary States and respect from Europe could be achieved only through the “medium of war.”