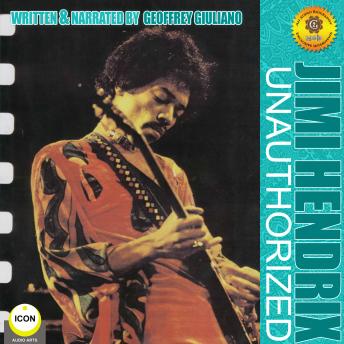 Download or Stream instantly more than 55,000 audiobooks.
Listen to "Jimi Hendrix Unauthorized" on your iOS and Android device.

Few know that Geoffrey Giuliano was a firm friend of Jimi Hendrix's family, staying for a weeks at a time at the home of Al Hendrix, Jimi's dad in the mid-1980s. He also knew Jimi's younger brother, Leon, as well as his aunts, uncles, cousins, and even Jimi's then 100-year-old grandmother, Nora Hendrix.
In addition, he also became close friends with Hendrix's Experience alumni, Mitch Mitchell, and Noel Redding along the way. Here, then, is the very private, unseen or reported secret world of an American icon. With rare Hendrix interviews and those who knew him best.
For everyone interested in the cultural significance of popular music, the cult of Jimi Hendrix, or even the curious commuter here is a once in a lifetime, must have audio event. Perfect for universities and all educational media.
Hosted by Geoffrey Giuliano
Produced by India Juliana in Bejing
Edited and mixed by Macc Kay in Bangkok
Project Coordinator Alex Franchi in Milan
Executive In Charge Of Production Avalon Giuliano in London
ICON Intern Eden Giuliano in Delhi
Special thanks to Brandon Stickney
Dedicated to Vrndarani Devi 1953-2017
Music By AudioNautix With Their Kind Permission
©2017 Icon Audio Arts (P)2017 Icon Audio Arts