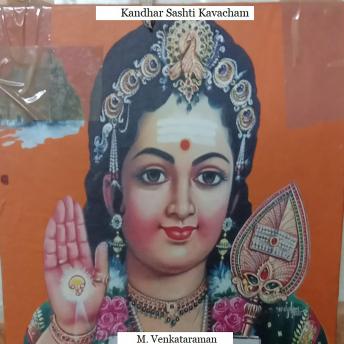 Download or Stream instantly more than 55,000 audiobooks.
Listen to "Kandhar Sashti Kavacham" on your iOS and Android device.

According to the Vedas, the sacred texts of Hinduism, God is only one though in the Hindu way of life, he is worshipped in different forms. It is said that God manifests himself as this universe. Hence, creation, preservation and dissolution of this universe are considered as the three aspects of God which is represented respectively as Brahma, Vishnu and Shiva.

According to mythology, Parvathy is the spouse of Shiva. They have two children, Ganesha and Karthikeya- Ganesha being elder and Karthikeya the younger. Karthikeya is also called as Skanda among many other names. In Tamil, he is popularly known as Murugan and Kandan. The Kanda Sashti Kavacham is one of the most powerful Tamil hymns dedicated to Lord Murugan.

According to a legend there was a demon named Surapadman. He got a boon from Brahma that he can only be killed by a son of Lord Shiva. After getting this boon, he was harassing the benevolent beings known as the Devas. The Devas prayed to Shiva. Shiva opened his third eye and six sparks emanated from there. The fire god Agni carried these sparks and placed them in a pond where these six sparks became six babies. Parvati took all six babies and hugged them into one. And that child is Murugan. Murugan became the Commander-in-Chief of the army of the Devas and fought a battle with Surapadman. Goddess Parvathy gave a sacred spear called ‘Vel’ to Murugan. On the sixth day of the waxing phase of the Moon called Sashti in the month of Kartika (October-November), Murugan vanquished Surapadman. Hence that day is considered as auspicious for the worship of Lord Murugan.

Kavacham means a shield. The name of Lord Murugan, his Vel and Sashti the day of his victory over the evil forces are the armour which the devotees of Murugan wear as Kanda Sashti Kavacham, the shield for welfare, happiness and prosperity.