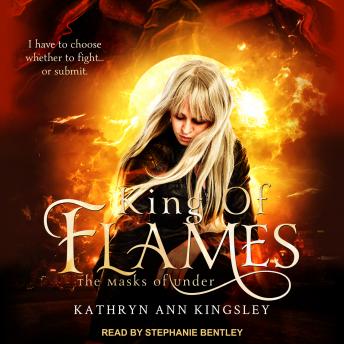 Download or Stream instantly more than 55,000 audiobooks.
Listen to "King of Flames" on your iOS and Android device.

Everything about my life has been pretty normal working as a forensic autopsy technician. Until the day I woke up with a mysterious symbol tattooed on my arm.

Suddenly normal no longer existed. The barrier between Earth and a world called Under, dissolved . . .

Now I'm trapped with dozens of other people. Held prisoner by the creators of myths and legends, where the realm is ruled by two masked kings who want to turn us into creatures like them.

But even though I didn't choose to be here, this new world manages to pull me deeper, affecting me differently than other humans. Unfortunately King Edu, also known as the King of Flames, notices this and I'm now considered a threat.

If I want to survive King Edu and the dangers of Under, I need to escape. The only problem is, there's another masked king who seems to have an interest in me. Aon, the King of Shadows, wants me here in this world, and he wants me alive.

I just need to figure out why.