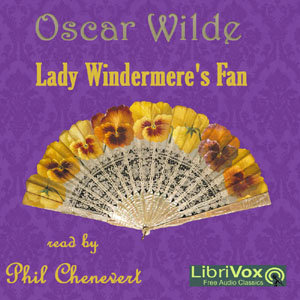 Download or Stream instantly more than 55,000 audiobooks.
Listen to "Lady Windermere's Fan (Version 2)" on your iOS and Android device.

Lady Windermere's Fan, A Play About a Good Woman is a four-act comedy by Oscar Wilde, first produced 22 February 1892 at the St James's Theatre in London. The play was first published in 1893. Like many of Wilde's comedies, it bitingly satirizes the morals of Victorian society, particularly marriage.

The story concerns Lady Windermere, who discovers that her husband may be having an affair with another woman. She confronts her husband but he instead invites the other woman, Mrs Erlynne, to his wife's birthday ball. Angered by her husband's unfaithfulness, Lady Windermere leaves her husband for another lover. Or does she? Is it really possible to trust delicious gossip? Are all men really bad? These and many other questions are raised and if not answered, then held up for public scrutiny in this biting satire of morals and proper behavior. The best known line of the play sums up the central theme:

We are all in the gutter, but some of us are looking at the stars. —Lord Darlington (from Wikipedia and the reader)