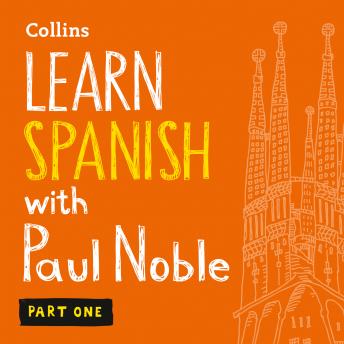 Download or Stream instantly more than 55,000 audiobooks.
Listen to "Learn Spanish with Paul Noble for Beginners – Part 1: Spanish Made Easy with Your 1 million-best-selling Personal Language Coach" on your iOS and Android device.


Learn Spanish the easy way at home. No books. No long lists of vocabulary. No chance of failure. Simply download, plug in and listen.


Welcome to Learn with Paul Noble – a tried and tested language learning method, used by more than a million people to speak fluently and confidently.


With Paul Noble’s simple, relaxed approach you will learn in a way that suits you – without having to memorise long lists of words you won’t use; scribbling notes as you listen; or feeling frustrated. Instead, Paul will introduce you to the basics of the Spanish language and guide you through over 4 hours of everyday scenarios that are practical, fun, and applicable. Just listen, interact, and learn wherever you are.

Whatever your experience with languages, whether you’re an absolute beginner or someone with basic knowledge who wants to improve their ability, this is the course to get you speaking Spanish quickly, confidently, and with no chance of failure.

Two native-speaking Spanish experts (one from Spain and one from Latin America) will help you to perfect your pronunciation as you progress through the course. You will learn a huge range of vocabulary in no time at all, and be able to quickly make your new knowledge work for you in a variety of everyday scenarios. A downloadable booklet is also included to use as a reference and revision tool.


Paul Noble left school unable to speak a language – having found that the traditional learning methods left him feeling ‘confused, incapable and unable to really say anything’. Determined that there must be a better way to learn, Paul spent years devising his own unique method of learning languages which cuts out all the grammar, all the memorisation, and all the stress. He began using his method to teach in his Language Institute and, thousands of students later, he prides himself on never having had a student fail.

This download is Part One of a three-part course. Once you’ve finished Part One, download Learn Spanish with Paul Noble for Beginners – Part Two.