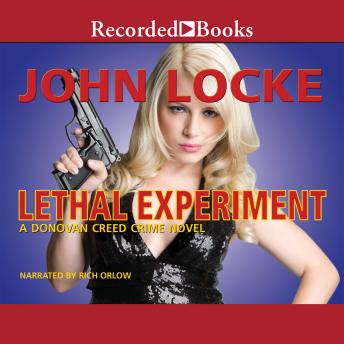 Download or Stream instantly more than 55,000 audiobooks.
Listen to "Lethal Experiment" on your iOS and Android device.

Donovan Creed, former CIA assassin, is a smart-aleck tough guy who can't resist a noble cause. Despite a ton of baggage and a penchant for call girls, he always finds a way to beat the bad guys. In this sequel to Lethal People, Creed is forced to choose between his thriving contract-killer business, his part in the lethal experiment, and his desire to live a normal life with the beautiful Kathleen Gray and her newly adopted daughter, Addie. Before that can happen, he has to take care of some lethal business involving a former lover. Lethal Experiment is a breezy and fun page-turner, featuring grisly humor, outrageous characters, and sexy dialogue. John Locke is the international best-selling author of seven Donovan Creed novels, all of which have made the Amazon/Kindle Top 20 Best Seller's List. Saving Rachel held the #1 spot for more than three weeks and remains one of the all-time best-selling e-books in the history of publishing. Locke has had four books in the Amazon Kindle Top 10 at the same time, and six in the Top 20. It is estimated that every 7 seconds a John Locke novel is downloaded somewhere in the world.