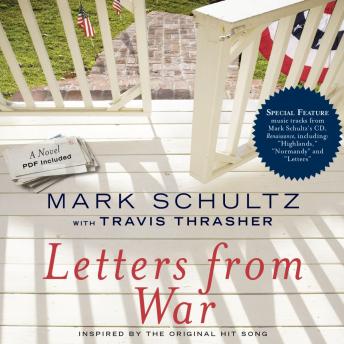 Letters from War: A Novel

Download or Stream instantly more than 55,000 audiobooks.
Listen to "Letters from War: A Novel" on your iOS and Android device.

When Beth Thompson’s only son, James, goes missing in action in Afghanistan, she is left with her prayers, hopes, fears... and letters. Mother and son have been writing since boot camp. James writes of his struggle to become a confident soldier and of his concern for his young wife and their unborn child. Beth, like any mom, praises her son’s courage even as she frets for his safety. Even after James disappears, Beth is comforted by a daily ritual of writing him about her feelings, faith, and attempts to maintain a normal life when nothing is really normal but the waiting. Based on platinum-selling singer Mark Schultz’s hit song “Letters from War,” this powerfully emotional and timely story reveals how faith sustains in even the darkest of circumstances. SPECIAL FEATURE: Contains music tracks from Mark Schultz's CD, Renaissance, including 'Highlands,' 'Normancy,' and 'Letters'