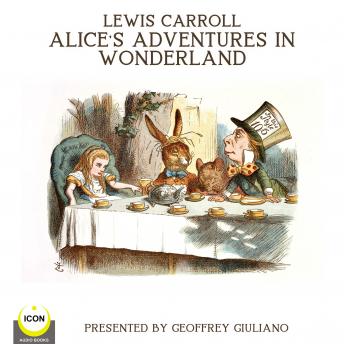 Download or Stream instantly more than 55,000 audiobooks.
Listen to "Lewis Carroll Alice’s Adventures In Wonderland" on your iOS and Android device.

“It’s no use going back to yesterday, because I was a different person then.” ALICE
“Why, sometimes I've believed as many as six impossible things before breakfast.” THE WHITE QUEEN
Alice's Adventures in Wonderland is a 1865 novel written by English author Charles Lutwidge Dodgson penned under the pseudonym of Lewis Carroll. It tells the story of a little girl named Alice falling through a rabbit hole into a fantasy world populated by peculiar, anthropomorphic creatures. Many feel it is perhaps the very first psychedelic novel. One can certainly draw parallels with the eating of magic mushrooms and apparently hallucinating, yet still it is chiefly a beloved children’s story. Loved keenly for generations here is an audiobook which is sure to entertain, educate, and delight people of all ages.
GEOFFREY GIULIANO is the author of thirty two internationally best selling books published by the biggest publishers in the world from 1984 until today. He is also an acclaimed Hollywood film actor, director, designer, and is the voice on over 500 popular audiobooks.
Series producer Avalon Giuliano in New York
Produced by Alex Franchi in Milan
Edited and mixed by Macc Kay in Bangkok
ICON intern Eden Garret Giuliano