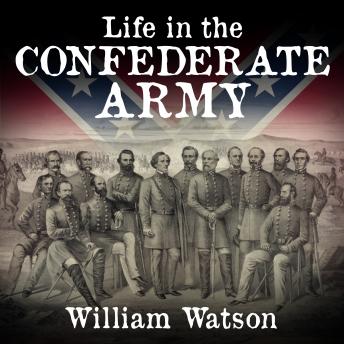 Life in the Confederate Army

Download or Stream instantly more than 55,000 audiobooks.
Listen to "Life in the Confederate Army" on your iOS and Android device.

In 1861 a Scotsman living in Louisiana took up the Confederate Flag.
William Watson presents a narrative of his observations and experience in the Southern States, both before and during the American Civil War.
Prior to the War, Watson lived in the hot, fertile state of Louisiana.
With Lincoln in office, and the secession of the southern states, North and South was plunged in a violent Civil War.
Watson recounts the widespread lack of political interest until the country reached this point.
In a volunteer corps, Watson was surrounded by several industrial and commercial classes. His recollections include fascinating insights into the men he served with.
Watson also gives his personal views on the causes of the war, and the conduct of both sides.
Detailing the lives of the soldiers, Watson reveals their living conditions, the level of destruction and death and their daily rations.
William Watson (1826-1906) was a Scottish native who moved to the Caribbean to work as a civil engineer. He later moved to Louisiana for business. While in Louisiana, he enlisted in the Confederate Army. He was one of many British citizens who had joined.