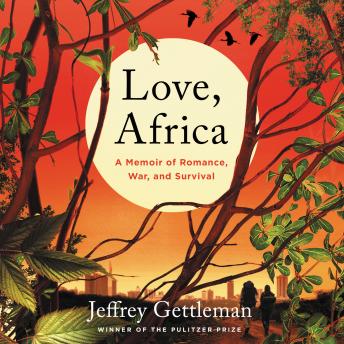 Love, Africa: A Memoir of Romance, War, and Survival

Download or Stream instantly more than 55,000 audiobooks.
Listen to "Love, Africa: A Memoir of Romance, War, and Survival" on your iOS and Android device.

From Jeffrey Gettleman, a Pulitzer Prize-winning New York Times journalist, comes a passionate, revealing story about finding love and finding a calling, set against one of the most turbulent regions in the world.

A seasoned war correspondent, Jeffrey Gettleman has covered every major conflict over the past twenty years, from Afghanistan to Iraq to the Congo. For the past decade, he has served as the East Africa bureau chief for the New York Times, fulfilling his teenage dream of living in Africa. Love, Africa is the story of how he got there—and of his difficult, winding path toward becoming a good reporter and a better man.

At nineteen, Gettleman fell in love, twice. On a community service trip in college, he went to Africa—a terrifying, exciting, dreamlike continent in the throes of change that imprinted itself on his imagination and heart. One day, he vowed, he would return there to stay. But around the same time he also fell in love with Courtenay, a fellow Cornell student—the brightest, fiercest, kindest woman he’d ever met.

Courtenay became a lawyer in America, and all Gettleman wanted was to be with her. But he also hungered to be in Africa. For the next decade he would waver between these two abiding passions. Finally, after a great deal of growing up, he learned to be honest with himself about what he wanted—a realization that ultimately fulfilled both of his deepest desires.

A beautifully rendered coming-of-age story in the tradition of Barbarian Days, Love, Africa is a tale of passion, professional rivalries, tortuous long-distance relationships, marital strife, forgiveness, parenthood, and happiness that explores the power of finding yourself in the most unexpected of places.