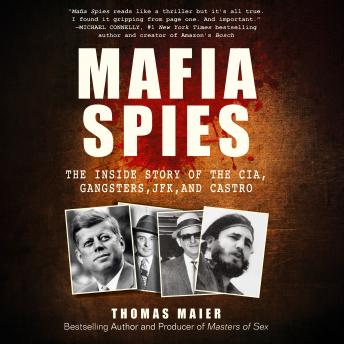 Mafia Spies: The Inside Story of the CIA, Gangsters, JFK, and Castro

Download or Stream instantly more than 55,000 audiobooks.
Listen to "Mafia Spies: The Inside Story of the CIA, Gangsters, JFK, and Castro" on your iOS and Android device.

From the Bestselling Author and Television Producer of Masters of Sex, a True Story of Espionage and Mobsters, Based on the Never-Before-Released JFK Files, and Optioned by Warner Bros.
Mafia Spies is the definitive account of America’s most remarkable espionage plots ever—with CIA agents, mob hitmen, “kompromat” sex, presidential indiscretion, and James Bond-like killing devices together in a top-secret mystery full of surprise twists and deadly intrigue. In the early 1960s, two top gangsters, Johnny Roselli and Sam Giancana, were hired by the CIA to kill Cuba’s Communist leader, Fidel Castro, only to wind up murdered themselves amidst Congressional hearings and a national debate about the JFK assassination.
Mafia Spies revolves around the outlaw friendship of these two mob buddies and their fascinating world of CIA spies, fellow Mafioso in Chicago, Cuban exile commandos in Miami, beautiful Hollywood women, famous entertainers like Frank Sinatra’s Rat Pack in Las Vegas, Castro’s own spies in Havana and his double agents hidden in Florida, J. Edgar Hoover’s FBI snooping, and the Kennedy administration’s “Get Castro” obsession in Washington. Thomas Maier is among the first to take full advantage of the National Archives’ 2017–18 release of the long-suppressed JFK files, many of which deal with the CIA’s top secret anti-Castro operation in Florida and Cuba.
With several new investigative findings, Mafia Spies is a spy exposé, murder mystery, and shocking true story that recounts America’s first foray into the assassination business, a tale with profound impact for today’s Trump era. Who killed Johnny and Sam—and why wasn’t Castro assassinated despite the CIA’s many clandestine efforts?