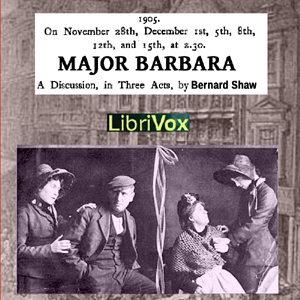 Download or Stream instantly more than 55,000 audiobooks.
Listen to "Major Barbara" on your iOS and Android device.

George Bernard Shaw's Major Barbara focuses on the family of aristocratic Lady Britomart Undershaft and her estranged husband Andrew, a millionaire armaments manufacturer. Their daughters Sarah and Barbara are both engaged to be married, and Lady Britomart decides to ask Andrew for monetary support. Barbara is a Major in the Salvation Army, and agrees to let her father visit the mission in the East End of London where she works. In exchange, she agrees to visit his munitions factory. The conflict between Barbara's philanthropic idealism and her father's hard-headed capitalism clash when he decides he wants to fund the Salvation Army. Shaw's comedy, as always, delves into political and social issues of the period, and provides a roster of finely- and humorously-drawn characters. (Summary by Elizabeth Klett)