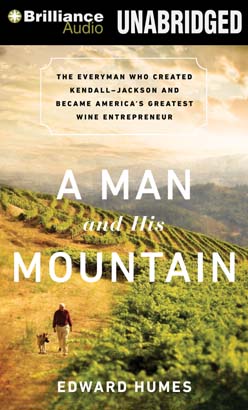 A Man and His Mountain: The Everyman Who Created Kendall-Jackson and Became America's Greatest Wine Entrepreneur

Download or Stream instantly more than 55,000 audiobooks.
Listen to "A Man and His Mountain: The Everyman Who Created Kendall-Jackson and Became America's Greatest Wine Entrepreneur" on your iOS and Android device.

A Pulitzer Prize-winning journalist tells the story of the self-made billionaire who built the Kendall-Jackson empire from nothing into the biggest selling brand of premium wines in the U.S.Jess Stonestreet Jackson was one of a small band of pioneering entrepreneurs who put California's wine country on the map. His life story is a compelling slice of history, daring, innovation, feuds, intrigue, talent, mystique, contrarianism, and luck, offering a unique window on the elegant, adventurous, and cut-throat worlds of Jackson's two passions: wine and horseracing. Time after time his decisions would be ignored, derided, then finally envied and imitated, as whole industries watched him become a billionaire and tried to keep up. He reinvented himself at mid-life, and became founder and CEO of Kendall-Jackson. The empire he constructed endures and thrives even after his death in 2011. In A Man and His Mountain, Edward Humes brings us the no-holds barred tale of the brilliant, infuriating, successful man who seemed to win more than his share by staying far ahead of the pack.