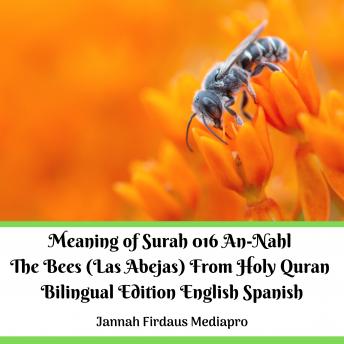 Download or Stream instantly more than 55,000 audiobooks.
Listen to "The Meaning of Surah 016 An-Nahl The Bees (Las Abejas) From Holy Quran Bilingual Edition English Spanish" on your iOS and Android device.

Audiobook The Meaning of Surah 016 An-Nahl The Bees (Las Abejas) From Holy Quran Bilingual Edition English Spanish.
Surah An-Na?l (The Bees) is the 16th chapter (surah) of The Holy Qur'an, with 128 ayah (verse). It is named after honey bees, and contains a comparison of the industry and adaptability of honey bees to the industry of man. Regarding the timing and contextual background of the supposed revelation (asbal al-nuzul), it is an earlier 'Meccan surah', which means it is believed to have been revealed in Mecca, instead of later in Medina.
This surah warns against polytheism, saying that the pagan gods cannot create anything [Quran 16:20], and against comparisons between Allah SWT (God) and any created beings [Quran 16:74]. It praises Allah SWT (God) for giving the Earth with all its wealth to mankind. According to this surah, all wonders of the natural world, like seas, stars, mountains are proofs of God's infinite power [Quran 16:14].
The verse 66 talks about the miracle in milk formation in cattle: 'From what is within their bodies, between excretions and blood, We produce for your drink, milk, pure and agreeable to those who drink it.' The verse 67 talks about miracle of vine: 'And from the fruit of the date-palm and the vine, ye get out strong drink and wholesome food: behold, in this also is a sign for those who are wise'.