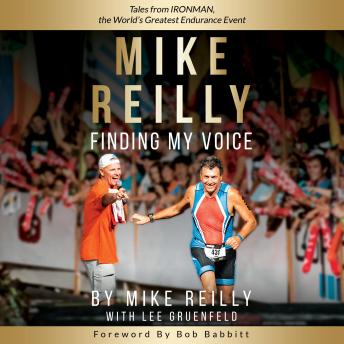 Download or Stream instantly more than 55,000 audiobooks.
Listen to "MIKE REILLY Finding My Voice: Tales From IRONMAN, the World’s Greatest Endurance Event" on your iOS and Android device.

IRONMAN is a sports phenomenon that has come to symbolize the very best of human striving, achievement and excellence. And race announcer Mike Reilly is known throughout the endurance sports world as the “Voice of IRONMAN.”

Every year, over three hundred thousand people around the world compete in a series of long-distance triathlons that test the outer limits of their physical abilities and mental toughness. Some do it for glory, some to test themselves, some to honor lost loved ones or colleagues, some to bring healing to their troubled lives.

Over the years, hundreds of IRONMAN athletes have shared their tales with Reilly. In this book, he tells some of the stories that have touched and inspired him, in the hope that they will do the same for the reader.

A young woman races in a contest against cancer that threatens her life. A soldier carries a flag through the full marathon distance to keep alive the memory of fallen comrades. Two of the sport’s most decorated champions do battle in the greatest head-to-head competition ever seen in any sport. Parents put their family back together after the loss of a child.

Reilly has witnessed it all, and brings it to life in a series of riveting stories that will have readers re-thinking their notions of what people are capable of when pushed to their limits.


Quotes About the Book:


“Every day for six months of training before Kona, as I visualized crossing the finish line, I didn’t see an image, I just heard the sound of Mike Reilly’s voice declaring, “Sean Astin, you are an IRONMAN!” Just the thought of the sound of Mike’s voice, saying those words, in that way, at that time, was the beacon that kept me going.” SEAN ASTIN, actor-producer-director


“Whether it’s on race day or getting to the start line, nobody finishes an IRONMAN without a personal struggle. Mike Reilly does a masterful job of showing us why those struggles are so worth it in the end.” MIRINDA CARFRAE, three-time IRONMAN world champion


“As I hit the top of the finish ramp I heard that amazing voice and those unbelievable words, ‘Hines Ward…you are an IRONMAN!’ Like the touchdown pass I caught to win the 2005 Super Bowl, hearing Mike Reilly declare me an IRONMAN was one of the greatest moments of my life.” HINES WARD, Super Bowl XL MVP


“No one knows the Ironman spirit better than Mike Reilly, having witnessed firsthand countless athletes come through the finish line. This is a passionate and inspiring book that will mark the beginning of the journey for tens of thousands more.” LIONEL SANDERS, 2017 ITU world championship, four-time IRONMAN champion


“The voice and passion of Mike Reilly bringing you home lifts you up and fulfills dreams for a lifetime. You'll love discovering what’s behind that passion in this book.” DAVE McGILLIVRAY, Boston Marathon Race Director/DMSE Sports