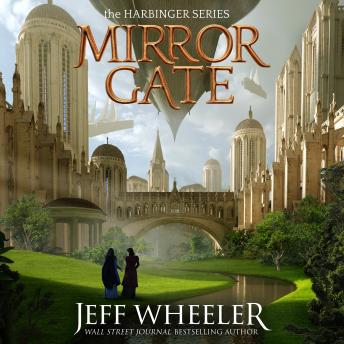 Download or Stream instantly more than 55,000 audiobooks.
Listen to "Mirror Gate" on your iOS and Android device.

Wall Street Journal bestselling author Jeff Wheeler continues his wondrous Harbinger series in which two young women unite as two worlds approach the brink of war…
Though relations between Princess Seraphin Fitzempress and her father have been strained, Sera’s royal position has remained unchallenged. Filled with self-doubt, she struggles to grasp the Mysteries—her greatest trial yet.
An education in the enigmatic magic is a necessary one, should Sera plan to rise in her station and invoke her powers during war. But the emperor’s death now leaves both Sera and her ambitious father eligible for the throne—a contest the prince regent intends to win. Even if it means an alliance with a rival empire.
Sera’s hope lies in Cettie, a waif raised in the world below, whose life has intertwined with Sera’s in the most unexpected ways. The Mysteries come easily to Cettie, and her studies have begun to yield new insight into her growing powers. But those same powers put Cettie in the path of those who would destroy her.
Now as the threat of war ignites and an insidious sickness spreads throughout the kingdom, Sera and Cettie will need to gather their courage and fight for each other’s lives…and for the future of their endangered world.