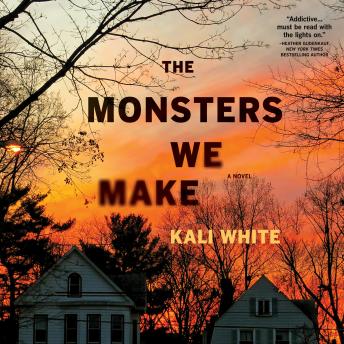 The Monsters We Make: A Novel

Download or Stream instantly more than 55,000 audiobooks.
Listen to "The Monsters We Make: A Novel" on your iOS and Android device.

It's August 1984, and paperboy Christopher Stewart has gone missing.Hours later, twelve-year-old Sammy Cox hurries home from his own paper route, red-faced and out of breath, hiding a terrible secret.Crystal, Sammy's seventeen-year-old sister, is worried by the disappearance but she also sees an opportunity: the Stewart case has echoes of an earlier unsolved disappearance of another boy, one town over. Crystal senses the makings of an award-winning essay, one that could win her a scholarship-and a ticket out of their small Iowa town.Officer Dale Goodkind can't believe his bad luck: another town and another paperboy kidnapping. But this time he vows that it won't go unsolved. As the abductions set in motion an unpredictable chain of violent, devastating events touching each life in unexpected ways, Dale is forced to face his own demons.Told through interwoven perspectives-and based on the real-life Des Moines Register paperboy kidnappings in the early 1980s-The Monsters We Make deftly explores the effects of one crime exposing another and the secrets people keep hidden from friends, families, and, sometimes, even themselves.