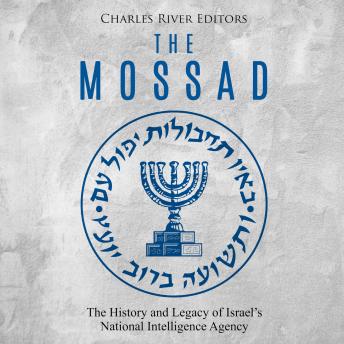 The Mossad, The: The History and Legacy of Israel’s National Intelligence Agency

Download or Stream instantly more than 55,000 audiobooks.
Listen to "The Mossad, The: The History and Legacy of Israel’s National Intelligence Agency" on your iOS and Android device.

'Where no counsel is, the people fall, but in the multitude of counselors there is safety.' - Proverbs XI:14

The conflict between the Israelis and Palestinians is technically 69 years old and counting but has its roots in over 2,000 years of history. With so much time and history, the Middle East peace process has become laden with unique, politically sensitive concepts like the right of return, contiguous borders, secure borders, demilitarized zones, and security requirements, with players like the Quartet, Palestinian Authority, Fatah, Hamas, the Arab League and Israel. Over time, it has become exceedingly difficult for even sophisticated political pundits and followers to keep track of it all.

Thanks to the existential crises Israel faced in the first decades of its existence, it was virtually necessary to possess superior intelligence organizations, so it should come as no surprise that the Mossad is one of the most famed agencies in history. In Hebrew, Mossad means “the Institute,” but the name is short for Mossad Merkazi le-Modiin ule-Tafkidim Meyuhadim, which means, “Central Institute for Intelligence and Special Operations.” Comprised of 10 separate departments, the Mossad as it exists today was formed via a directive during the leadership of Prime Minister Ben Gurion, and it stated, 'For our state which since its creation has been under siege by its enemies. Intelligence constitutes the first line of defense...we must learn well how to recognize what is going on around us.'

Since then, the Mossad has been recognized by some as the greatest intelligence service in the world and one of the most ruthless and opaque by others. Since its inception in 1949, the Mossad has been credited with incredible rescues, violent assassinations, and the clever sabotage of enemy operations. Whether nefarious or essential, both critics and supporters of Mossad recognize that its estimated 1,200 employees have the unique ability to adapt to uncertain and hostile circumstances, accomplish large-scale objectives with limited resources, and persevere when seemingly hopelessly outnumbered.

The Mossad: The History and Legacy of Israel’s National Intelligence Agency looks at the agency’s organizational characteristics, historical inception, Cold War growth, and its recent influence.