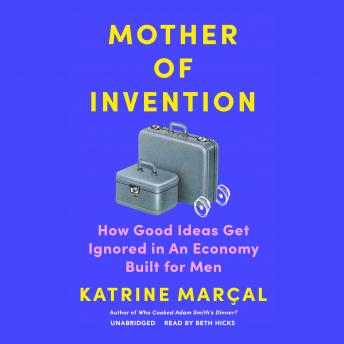 Mother of Invention: How Good Ideas Get Ignored in an Economy Built for Men

Download or Stream instantly more than 55,000 audiobooks.
Listen to "Mother of Invention: How Good Ideas Get Ignored in an Economy Built for Men" on your iOS and Android device.

An illuminating and maddening examination of how gender bias skews innovation, technology, history, and work, by Swedish journalist Katrine Marçal

It all starts with a rolling suitcase.

The wheel was invented some five thousand years ago and the modern suitcase in the mid-nineteenth century, but it wasn't until the 1970s that someone successfully married the two. What was the hold up? For writer and journalist Katrine Marçal, the answer is both shocking and simple: because "real men" carried their bags, no matter how heavy. There were rolling suitcases before the seventies, but they were marketed as a niche product for the presumably few women traveling alone, and the wheeled suitcase wasn't "invented" until it was no longer threatening to masculinity.

Mother of Invention draws on this example and many others, from electric cars to tech billionaires, to show how gender bias stifles the economy and holds us back. Our traditional notions about men and women have delayed innovations, sometimes by hundreds of years, and have distorted our understanding of our history. While we talk about the Iron Age and the Bronze Age, we might as well talk about the Ceramic Age or the Flax Age, since these technologies were just as important. But inventions associated with women are not considered to be technology in the same way.

Katrine Marçal's Mother of Invention is a fascinating examination of business, technology, and innovation through a feminist lens. Marçal takes us on a tour of the global economy, arguing that gendered assumptions dictate which businesses get funding, how we value work, and how we trace human progress. And it carries a powerful message: If we upend our biases, we can unleash our full potential, tackling climate change and wielding technology to become more human, rather than less.