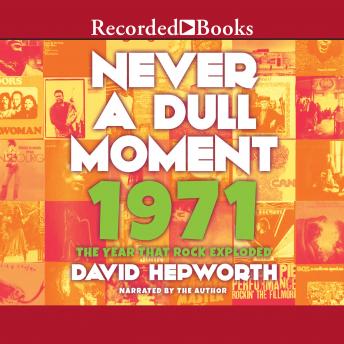 Never a Dull Moment: 1971The Year That Rock Exploded

Download or Stream instantly more than 55,000 audiobooks.
Listen to "Never a Dull Moment: 1971The Year That Rock Exploded" on your iOS and Android device.

A rollicking look at 1971 - the busiest, most innovative and resonant year of the 70s, defined by the musical arrival of such stars as David Bowie, Pink Floyd, Led Zeppelin, and Joni Mitchell On New Year's Eve, 1970, Paul McCartney told his lawyers to issue the writ at the High Court in London, effectively ending The Beatles. You might say this was the last day of the pop era. The following day, which was a Friday, was 1971. You might say this was the first day of the rock era. And within the remaining 364 days of this monumental year, the world would hear Don McLean's 'American Pie,' The Rolling Stones' 'Brown Sugar,' The Who's 'Baba O'Riley,' Zeppelin's 'Stairway to Heaven,' Rod Stewart's 'Maggie May,' Marvin Gaye's 'What's Going On,' and more. David Hepworth, an ardent music fan and well regarded critic, was twenty-one in '71, the same age as many of the legendary artists who arrived on the scene. Taking us on a tour of the major moments, the events and songs of this remarkable year, he shows how musicians came together to form the perfect storm of rock and roll greatness, starting a musical era that would last longer than anyone predicted. Those who joined bands to escape things that lasted found themselves in a new age, its colossal start being part of the genre's staying power. Never a Dull Moment is more than a love song to the music of 1971. It's also an homage to the things that inspired art and artists alike. From Soul Train to The Godfather, hot pants to table tennis, Hepworth explores both the music and its landscapes, culminating in an epic story of rock and roll's best year.