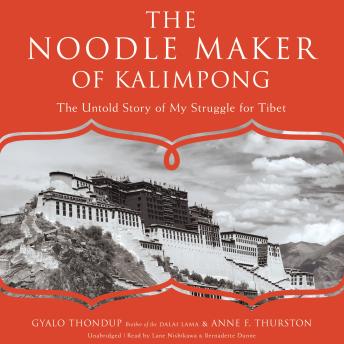 The Noodle Maker of Kalimpong: The Untold Story of My Struggle for Tibet

Download or Stream instantly more than 55,000 audiobooks.
Listen to "The Noodle Maker of Kalimpong: The Untold Story of My Struggle for Tibet" on your iOS and Android device.

In December 2010 residents of Kalimpong, a town on theIndian border with Tibet, turned out en masse to welcome the Dalai Lama. It wasonly then they realized for the first time that the neighbor they knew as thenoodle maker of Kalimpong was also the Dalai Lama's older brother. The Tibetanspiritual leader had come to visit the Gaden Tharpa Choling monastery and joinhis brother for lunch in the family compound.
Gyalo Thondup has long lived out of the spotlight and hiddenfrom view, but his whole life has been dedicated to the cause of his youngerbrother and Tibet. He served for decades as the Dalai Lama's special envoy, thetrusted interlocutor between Tibet and foreign leaders from Chiang Kai-shek toJawaharlal Nehru, Zhou Enlai to Deng Xiaoping. Traveling the globe and meetingbehind closed doors, Thondup has been an important witness to some of theepochal events of the twentieth century. No one has a better grasp of theongoing great game as the divergent interests of China, India, Russia, and theUnited States continue to play themselves out over the Tibetan plateau. Onlythe Dalai Lama himself has played a more important role in the politicalhistory of modern, tragedy-ridden Tibet. Indeed, the Dalai Lama's dramaticescape from Lhasa to exile in India would not have been possible without hisbrother's behind-the-scenes help.
Now, together with Anne F. Thurston, who cowrote theinternational bestseller The Private Lifeof Chairman Mao, Gyalo Thondup is finally telling his story.
The settings are exotic-the Tibetan province of Amdo wherethe two brothers spent their early childhood; Tibet's legendary capital ofLhasa; Nanjing, where Thondup received a Chinese education; Taiwan, where hefled when he could not return to Tibet; Calcutta, Delhi, and the Himalayan hilltowns of India, where he finally made his home; Hong Kong, which served as hislistening post for China, and the American Rockies, where he sent young Tibetanresistance fighters to be trained clandestinely by the CIA.
But Thondup's story does not reiterate the otherworldly,Shangri-La vision of the Land of Snows so often portrayed in the West. Instead,it is an intimate, personal look at the Dalai Lama and his immediate family andan inside view of vicious and sometimes deadly power struggles within thePotala Palace-that immensely imposing architectural wonder that looms overLhasa and is home to both the spiritual and secular seats of Tibetan power.