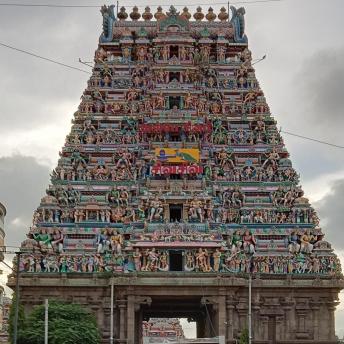 Download or Stream instantly more than 55,000 audiobooks.
Listen to "Paradise comes to Mylapore" on your iOS and Android device.

Viswam is a resident of Mylapore which is a place in the city of Chennai in India. Mylapore is an area famous for temples, churches and other religious and cultural places and is also historically, culturally and traditionally a very ancient one.

It was a time of Dasara, one of the important festival of the Hindus. Immediately prior to the beginning of Dasara, there is a period of fifteen days known as Mahalayam also called as Pitrupaksha. It is a fortnight of ancestors and people having faith in the Vedic religion used to perform certain religious austerities. Viswam is making arrangements for performance of these austerities.

Vishnu Sarma is the father of Viswam who passed away two years before. He comes to Viswam’s place on the earth in a group along with his family and friends from the world of the ancestors to take part in the acceptance of the austerities being performed by his son. These ancestors, who are dead and gone, are coming in their subtle bodies invisible to people on earth. Vishnu Sarma also brings along with him the English poets William Wordsworth and Alfred Tennyson from their place in the Paradise. Vishnu Sarma takes them along to the various places in Mylapore.

How does Wordsworth and Tennyson experience their visit to Mylapore? What is the significance of these austerities? What is the greatness of the temples and other places in Mylapore?

Listen to this story and enjoy.