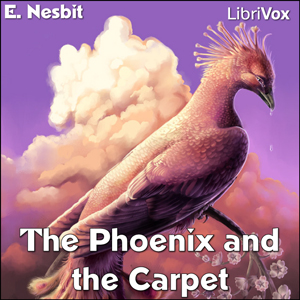 The Phoenix and the Carpet

Download or Stream instantly more than 55,000 audiobooks.
Listen to "The Phoenix and the Carpet" on your iOS and Android device.

The Phoenix and the Carpet is a fantasy novel for children, written in 1904 by E. Nesbit. It is the second in a trilogy of novels that began with Five Children and It (1902), and follows the adventures of the same five protagonists - Cyril, Anthea, Robert, Jane and the Lamb. Their mother buys the children a new carpet to replace the one from the nursery that was destroyed in an unfortunate fire accident. Through a series of exciting events, the children find an egg in the carpet which cracks into a talking Phoenix. The Phoenix explains that the carpet is a magical one that will grant them three wishes per day. (Summary from Wikipedia)