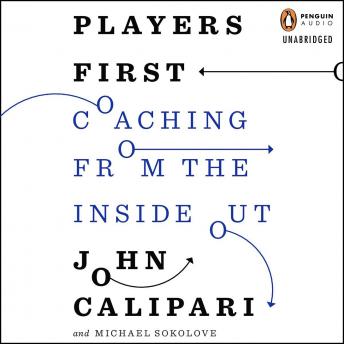 Players First: Coaching from the Inside Out

Download or Stream instantly more than 55,000 audiobooks.
Listen to "Players First: Coaching from the Inside Out" on your iOS and Android device.

In Players First, John Calipari relates for the first time anywhere his experiences over his first four years coaching the Kentucky Wildcats, college basketball’s most fabled program, from the doldrums to a national championship, drawing lessons about leadership, character, and the path to personal and collective victory.

At its core, Calipari’s coaching philosophy centers on keeping his focus on the players—what they need to get the best out of themselves and one another. He is beloved by his players for being utterly honest with them and making promises that he always keeps, no matter what. He knows that in this age, they come to Kentucky to prepare for the NBA; every year he gets players who in a previous era would have gone directly into the pros from high school but now have to play college basketball for one year. Calipari has fought against this system, but he has to play within it, and so he does, better than anyone.

The result is an extraordinary leadership challenge: every year Coach Cal gets a handful of eighteen-year-old kids who have been in a bubble for the previous four years at least, filled with hype about their own greatness, and they come to Kentucky feeling sure that they will play for their coach only for seven months before they go on to greater glory. Every year, he has to reinvent his team. After his 2012 NCAA championship, it was particularly dramatic; he lost his first six players in the first round, meaning that someone who couldn’t even start for Kentucky was a first-round draft pick.

The overall record at Kentucky, and for his career, puts Calipari in the pantheon of the greatest coaches in the history of the game. Bold, funny, and truthful, like Coach Calipari himself, Players First is truly the first deep reckoning with the meaning of his experiences and the gifts of insight they offer.