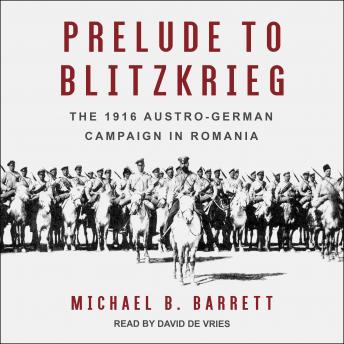 Prelude to Blitzkrieg: The 1916 Austro-German Campaign in Romania

Download or Stream instantly more than 55,000 audiobooks.
Listen to "Prelude to Blitzkrieg: The 1916 Austro-German Campaign in Romania" on your iOS and Android device.

In contrast to the trench-war deadlock on the Western Front, combat in Romania and Transylvania in 1916 foreshadowed the lightning warfare of World War II. When Romania joined the Allies and invaded Transylvania without warning, the Germans responded by unleashing a campaign of bold, rapid infantry movements, with cavalry providing cover or pursuing the crushed foe. Hitting where least expected and advancing before the Romanians could react-even bombing their capital from a Zeppelin soon after war was declared-the Germans and Austrians poured over the formidable Transylvanian Alps onto the plains of Walachia, rolling up the Romanian army from west to east, and driving the shattered remnants into Russia. Prelude to Blitzkrieg tells the story of this largely ignored campaign to determine why it did not devolve into the mud and misery of trench warfare, so ubiquitous elsewhere.