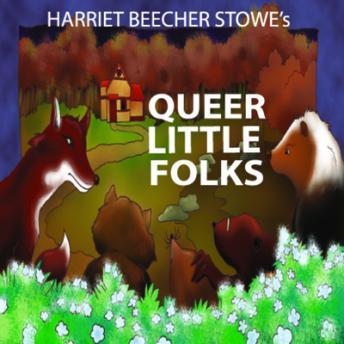 Download or Stream instantly more than 55,000 audiobooks.
Listen to "Queer Little Folks" on your iOS and Android device.

The story telling genius of Harriet Beecher Stowe is never more obvious than in these animal stories. Meant to enchant as well as instruct young listeners on the dilemmas we face growing up, Ms. Stowe sees through the eyes of the forest creatures, large and small, and shows us how things might work in the adventure of growing "big".

This set of short tales include:
1. Hen that Hatched Ducks
2. The Nutcrackers of Nutcracker Lodge
3. The History of Tip-Top
4. Miss Katy-did and Miss Cricket
5. Mother Magpie's Mischief
6. The Squirrels That Live in a House
7. Hum, Son of Buz
8. Our Country Neighbors
9. The Diverting History of Little Whiskey

AUTHOR
Harriet Beecher Stowe (1811-1896) was an American author who became a major catalyst for the abolishion of slavery with her novel, Uncle Tom's Cabin.

A deeply religious woman from an enormous and devout family, Stowe had enormous compassion for the plight of slaves and infused her writings with humanity, creating characters and situations that resonated with people all over the world.

The impact of Uncle Tom's Cabin was so profound, that when Abraham Lincoln met Harriet Beecher Stowe, he reportedly said ""So you are the little woman who wrote the book that started this great war.""

COMMENTARY
Quotes about Queer Little Folks
This was an awesome and amazing book of several wonderful little moral tales, mostly told from the perspective of cleverly anthropomorphized animals such as inhabit the woods of New England. The stories are witty, and clever. There are subtle puns and the characters are keenly portrayed.

I also found that the attitude and morals are almost surprisingly in line with those of today--although there was more mention of death than you'd find in a contemporary book of children's tales.

I'd totally recommend reading this, and reading it to any and all small children that you can get to sit still long enough to listen. (Amazon.com)
"