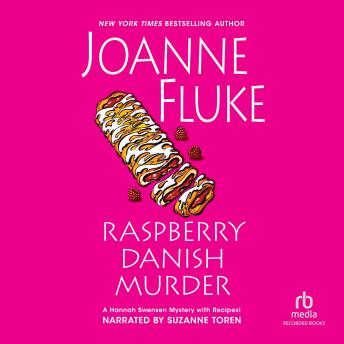 Download or Stream instantly more than 55,000 audiobooks.
Listen to "Raspberry Danish Murder" on your iOS and Android device.

Thanksgiving has a way of thawing the frostiest hearts in Lake Eden. But that won't be happening for newlywed Hannah Swensen Barton--not after her husband suddenly disappears . . . Hannah has felt as bitter as November in Minnesota since Ross vanished without a trace and left their marriage in limbo. Still, she throws herself into a baking frenzy for the sake of pumpkin pie and Thanksgiving-themed treats while endless holiday orders pour into The Cookie Jar. Hannah even introduces a raspberry Danish pastry to the menu, and P.K., her husband's assistant at KCOW-TV, will be one of the first to sample it. But instead of taking a bite, P.K., who is driving Ross's car and using his desk at work, is murdered. Was someone plotting against P.K. all along or did Ross dodge a deadly dose of sweet revenge? Hannah will have to quickly sift through a cornucopia of clues and suspects to stop a killer from bringing another murder to the table . . .