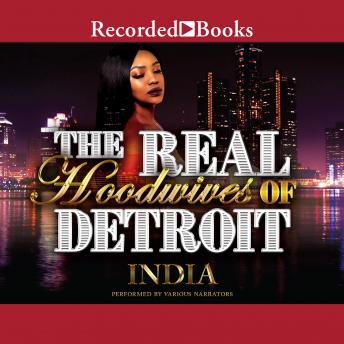 The Real Hoodwives of Detroit

Download or Stream instantly more than 55,000 audiobooks.
Listen to "The Real Hoodwives of Detroit" on your iOS and Android device.

Welcome to Detroit, Michigan, home of the grittiest, illest, most hardcore, crime-infested, poverty-stricken neighborhoods in the country. It's sometimes referred to as the Murder Capital because of the huge murder rate that never ceases to surprise us, the Murder Mitten, or the Dirty Glove because of the state's shape on the U.S. map. Detroit is home to many scholars, rappers, athletes, and concerned citizens, but the streets belong to those in the underworld-addicts, dealers, and the women who help run the show from behind the scenes . . . The Real Hoodwives of Detroit! No, you won't see these ladies on any television show, but you will see them make appearances in court for their mans' hearing, or at the county jail on visiting day. You might even catch them riding shotgun, with a nine tucked in their Fendi bag, waiting to pop off and protect their men at any cost. And of course, they make appearances in the hood, twenty-four seven, three hundred and sixty-five days of the year. Follow Nikki, Tonya, Chloe, Mina, and Gucci as they ride you through Detroit, one city block at a time. Watch as the tales of the black and dangerous unfold right before your eyes. In Detroit, only the raw and real survive living to see another day. These streets are known for breaking the weak and leaving them helpless. They aren't made for everybody. Scared? You should be . . . WELCOME TO DETROIT!