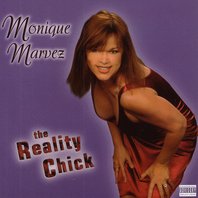 Download or Stream instantly more than 55,000 audiobooks.
Listen to "The Reality Chick" on your iOS and Android device.

Forget reality TV. When you scratch your head bewildered, frustrated, and hurt, don't get mad...get 'Reality Chick', Monique Marvez's follow up to her critically-acclaimed best seller 'Built for Comfort'. 'Reality Chick' will have you laughing as you cry out, "Aha! That's why they make me crazy!" Enlightening as well as entertaining, this take-no-prisoners look at relationships is certain to be a comedy classic.

A complimentary comparison to Bette Midler is only the beginning of what can be said about Monique Marvez. With an hourglass figure and a stopwatch wit, she has emerged as one of Miami's brightest and most provocative talents. Marvez believes in the adage, "You can never make a second first impression." She has consistently sold out clubs and concert halls from Miami to Anchorage.