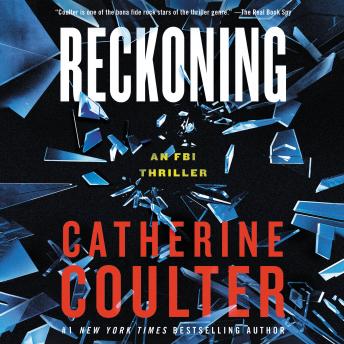 Download or Stream instantly more than 55,000 audiobooks.
Listen to "Reckoning: An FBI Thrilller" on your iOS and Android device.

Agents Savich and Sherlock are back in the latest installment in Catherine Coulter’s #1 New York Times bestselling FBI Thriller series, and this time both are enlisted to help women with traumatic pasts who are in mortal danger.

When she was twelve years old, Kirra Mandarian’s parents were murdered and she barely escaped with her life. Fourteen years later Kirra is a commonwealth attorney back home in Porte Franklin, Virginia, and her goal is to find out who killed her parents and why. She assumes the identity of E.N.—Eliot Ness—and gathers proof to bring down the man she believes was behind her parents’ deaths. She quickly learns that big-time criminals are very dangerous indeed and realizes she needs Dillon Savich’s help. Savich brings in Special Agent Griffin Hammersmith to work with Lieutenant Jeter Thorpe, the young detective who’d saved Kirra years before.

Emma Hunt, a piano prodigy and the granddaughter of powerful crime boss Mason Lord, was only six years old when she was abducted. Then, she was saved by her adoptive father, San Francisco federal judge Ramsey Hunt. Now a 12-year-old with a black belt in Tae Kwon Do, she narrowly saves herself from a would-be kidnapper at Davies Hall in San Francisco. Worried for her safety, Emma’s entire family joins her for her next performance, at the Kennedy Center in Washington, D.C.. Sherlock and officers from METRO are assigned to protect her, but things don’t turn out as planned…