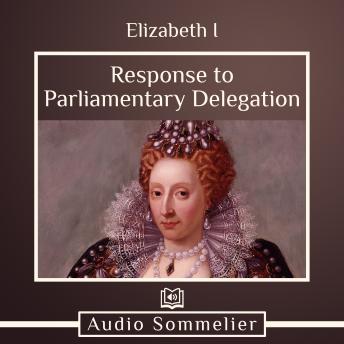 Download or Stream instantly more than 55,000 audiobooks.
Listen to "Response to Parliamentary Delegation" on your iOS and Android device.

Elizabeth I became queen in 1558. In 1559, a worried Parliament petitioned her to marry so she may produce an heir, and she responded by courteously telling them she would do as she saw fit. With the queen still unmarried, they repeated their plea in 1566, and Elizabeth answered with significantly less patience in this fiery speech. Tired of being told what to do, she chastised the Parliament: “A strange thing that the foot should direct the head in so weighty a cause,” she told them, and reigned for 37 more years a single woman.