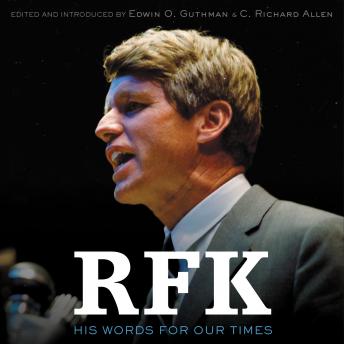 RFK: His Words for Our Times

Download or Stream instantly more than 55,000 audiobooks.
Listen to "RFK: His Words for Our Times" on your iOS and Android device.

In honor of the fiftieth anniversary of Robert Francis Kennedy’s death, an inspiring collection of his most famous speeches accompanied by commentary from notable historians and public figures.

Twenty-five years after Bobby Kennedy was assassinated, RFK: His Words for Our Times, a celebration of Kennedy’s life and legacy, was published to enormous acclaim. Now, a quarter century later, this classic volume has been thoroughly edited and updated. Through his own words we get a direct and intimate perspective on Kennedy’s views on civil rights, social justice, the war in Vietnam, foreign policy, the desirability of peace, the need to eliminate poverty, and the role of hope in American politics.

Here, too, is evidence of the impact of those he knew and worked with, including his brother John F. Kennedy, Lyndon Johnson, Martin Luther King, Jr., and Cesar Chavez, among others. The tightly curated collection also includes commentary about RFK’s legacy from major historians and public figures, among them Barack Obama, Bill Clinton, Eric Garcetti, William Manchester, Anna Quindlen, Elie Wiesel, and Desmond Tutu. Assembled with the full cooperation of the Kennedy family, RFK: His Words for Our Times is a potent reminder of Robert Kennedy’s ability to imagine a greater America—a faith and vision we could use today.