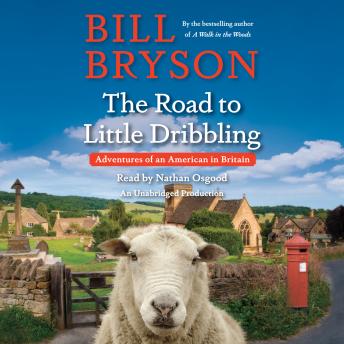 The Road to Little Dribbling: Adventures of an American in Britain

Download or Stream instantly more than 55,000 audiobooks.
Listen to "The Road to Little Dribbling: Adventures of an American in Britain" on your iOS and Android device.


Twenty years ago, Bill Bryson went on a trip around Britain to discover and celebrate that green and pleasant land. The result was Notes from a Small Island, a true classic and one of the bestselling travel books ever written. Now he has traveled about Britain again, by bus and train and rental car and on foot, to see what has changed—and what hasn’t.

Following (but not too closely) a route he dubs the Bryson Line, from Bognor Regis in the south to Cape Wrath in the north, by way of places few travelers ever get to at all, Bryson rediscovers the wondrously beautiful, magnificently eccentric, endearingly singular country that he both celebrates and, when called for, twits. With his matchless instinct for the funniest and quirkiest and his unerring eye for the idiotic, the bewildering, the appealing, and the ridiculous, he offers acute and perceptive insights into all that is best and worst about Britain today.

Nothing is more entertaining than Bill Bryson on the road—and on a tear. The Road to Little Dribbling reaffirms his stature as a master of the travel narrative—and a really, really funny guy.